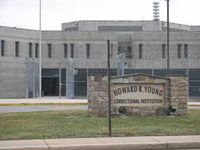 The Howard R. Young Correctional Institution (also known as Gander Hill Prison due to the neighborhood in which it is located) is a Level 5 facility in the northeast section of Wilmington, Delaware. The facility is named for a 33-year Department veteran who died in 2001 after a battle with cancer. Originally called the Multi-Purpose Criminal Justice Facility, it was renamed in honor of Young in February 2004. Young was the first Warden of the prison when it opened in 1982.

The original facility, now called the West Wing, was designed to hold 360 detainees, individuals who are awaiting trial/sentencing or unable to make bail. In 1992, a new section, the East Wing, opened. This construction project added 480 beds for sentenced offenders. Additional construction projects have increased the capacity to 1,180. The facility now averages 1,500 offenders.