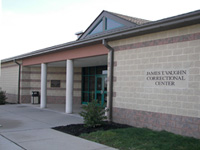 JTVCC opened in 1971 with a capacity of 441. Expansions since then have increased the total bed capacity to over 2,600. In 1996, construction began on a $110 million, 888-bed addition. The expansion included 600 new maximum security cells, the addition of almost 26,000 linear feet (4.8 miles) of security fencing, the installation of 6 miles of razor wire, the construction of a new central tower and an additional perimeter tower, and the installation of new security cameras and enhanced observation points. The 600 maximum security cells have been constructed in six new housing units with 888 new beds. Three hundred cells have a single bed; 300 cells are double-bunked unless they are handicap-accessible in which case the cell is single bunked. All inmates are classified and assigned quality of life levels consistent with their criminal history, institutional behavior/history, threat to public safety and institutional safety and security, and program needs. The new addition houses the Security Housing Unit (SHU) and the Medium-High Housing Unit (MHU).

The SHU houses those inmates who have demonstrated that they cannot be housed in a lesser security setting and/or whose behavior and history are conducive to maximum security housing. In addition, inmates sentenced to the death penalty are housed in the Security Housing Unit. There are 300 cells in the SHU. Each cell is single-bunked. These inmates may have visitors, make telephone calls and have limited numbers of personal items in their cells including a radio, magazines, and books according to the inmate's assigned quality of life level. Inmates, other than those sentenced to the death penalty, may earn their way out of the SHU by exhibiting appropriate behavior, complying with institutional rules and participating in treatment, education, and/or work programs.

JTVCC has several programs designed to rehabilitate the inmate including educational opportunities, vocational training, work assignments, spiritual/religious programs and a variety of other classes and programming.